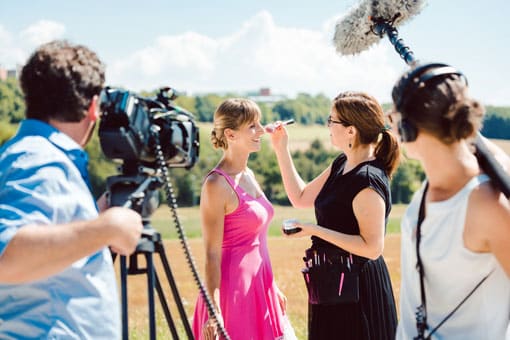 Film acting – or screen acting – is specific to acting performances for camera. It shares a lot of similarities with stage acting, but it’s also distinct from stage acting, especially in terms of techniques used in film acting.

How is Film Acting Different to Stage Acting?

Film acting requires different use of the body, facial expressions, voice and characterisation than stage acting. Film acting is much more subtle and nuanced, it relies more on subtle movements and expressions than stage performances, which require lots of projection and amplification.

Film acting also requires understanding of the camera’s role in telling the story. In theatre, the barrier between actors and audience is called “the fourth wall” but in film, that barrier is a lens, which is purposed by the director and comes with its own characterisation and can dramatically alter the storytelling.

Another key difference between film acting and stage acting is all around the style of acting: film acting is almost exclusively in a naturalistic style, unlike stage acting, where there is more creative licence available to act in a range of different styles.

The life of a film actor can be tough. It’s a highly competitive industry, with a lot of people interested to pursue a career in film acting.

So what film acting skills do you need to stand out?

To be a successful film actor, you’ll ideally need a range of both creative and technical film acting skills. These include good working knowledge of how to use your body, face and voice to express a character and to tell the story.

You’ll also need the ability to interpret a character from the script, and express that character in front of the camera. You’ll need to make your performance believable, take after take after take.

Although some people are lucky enough to claim a “natural talent”, the best way to build and develop these skills is to take part in film acting training, either acting classes or workshops, or through regular practise in making your own work.

These are practical skills that you need to work on, so they aren’t easily developed through passive learning. You have to practise them to develop and refine your abilities.

These acting skills are important, but life in film acting isn’t all about what you can do in front of a camera.

What Other Skills are Useful for a Career in Film Acting?

You’ll need to engage in the casting and audition process, which includes building relationships, professionalism and networking. This also takes a huge amount of resilience and perseverance; you may have to deal with a lot of rejection, and you may find yourself juggling “day jobs” with auditions, often at short notice.

You’ll also need to demonstrate your adaptability. Casting directors may ask particular requests of you, change the role you’re auditioning for, or ask that you show them a different scene to the one you’ve prepared for.

Once on set, another key trait you’ll need is patience. It takes a long time to shoot a film production, every shot takes preparation and set up and there will be many – many – times you’ll need to wait patiently as the crew prepare to shoot or reshoot. You’ll also need patience when filming, as it’s likely you’ll be asked to replay the scene many times over. This is to capture multiple angles, but also because things go wrong – often this is nothing to do with your performance.

Once you’ve completed production, there may be other promotional responsibilities you have as part of your film acting role. These include press junkets, talk shows and other promos designed to raise awareness of the film or TV show. This can be one of the most tiresome and disliked aspects of film acting, because it’s often repetitive, the days are long, and it often involves lots of travel. It also stops you from being available for more film acting work, but it’s an important part of the contract. You’ll need to able to handle journalists and press activities with patience and professionalism for this part of the job.

When a production finishes, it can feel overwhelming for screen actors, as you very quickly go from a family-like bubble to all being very separate and no longer tied together by the production. Many screen actors struggle when this happens, so developing your resilience and building a strong support network can help.

The practicalities of building a career in film acting are often much more than just knowing how to act to camera. Like in any creative role, how you work with others plays a huge part in the journey.